Wynter Sons- Bloomington Indiana "Class of 2025" (Force in the trenches) 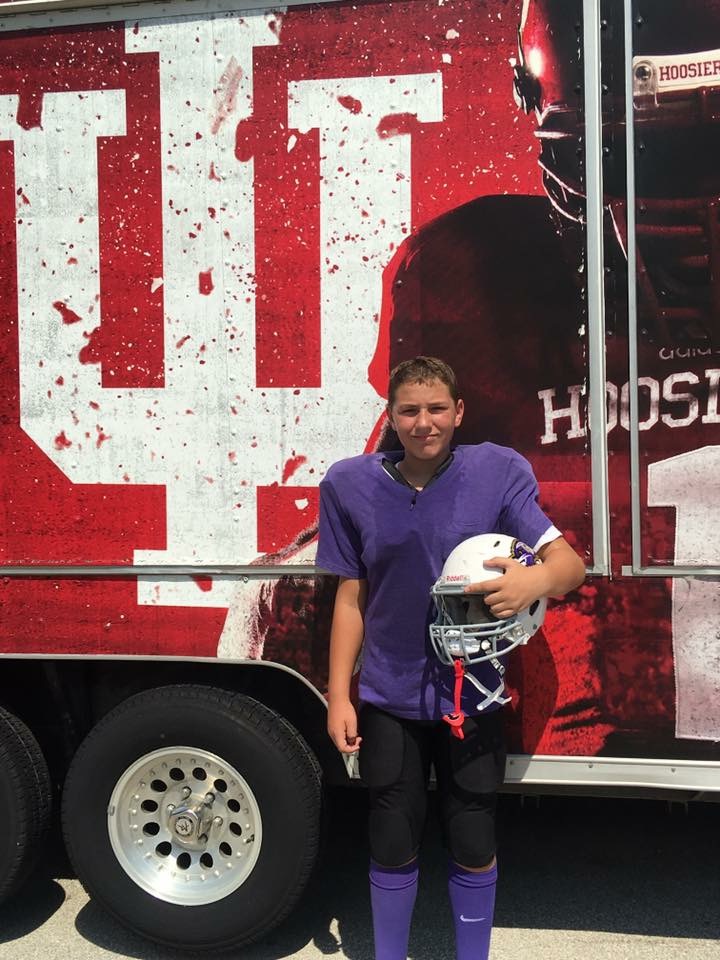 The quest to field the best team in the country is no easy task. Scouting the "best-of-the-best"  is not easy when there are other programs recruiting in the same area and thus saturating the talent pool. The search for players becomes a ground roots approach and canvassing the entire state is a must.

During my Indiana Select scouting routine;  I decided to contact a youth director Michael Dabney for some help.  Dabney is a youth sports advocate from my hometown of Bloomington Indiana and is a person I can trust. Michael Dabney managed to recommend several players to Indiana Select, all of which turned out to be tremendous contributors from the start of the season to the end.

I plan on writing articles about all the players and have only gotten one written so far about stand out DE/TE Tysen Smith to this point. (More Players articles to come) 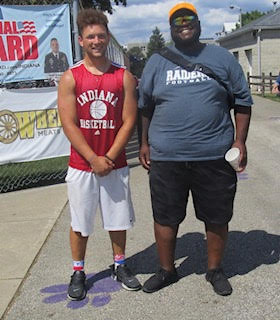 This article is about a man-child, Wynter Sons,  who just turned 12 years old and is in the 6th grade. Wynter completely dominated on defense during the All-Star season. I nick named him, "Winter, Spring, Summer, and Fall", because this student athlete can flat out play.

Anybody who knows me understands that I have energy, passion, and love watching football for the entertainment value alone. I like to keep things light 99% of the time and watching Wynter play this season made it fun on the sideline to say the least. I watched as Sons punished the offense play after play with his explosive power and tremendous speed making him almost impossible for the offensive linemen to block.

The entire game was filled with me ranting and asking the Head Coach "Zonk" and Assistant Coach "Griffits" the same questions over and over.

3. Why would they run to his side period?

4. Is this kid really that good?

5. When are they gonna figure out double teams don't work against him?

7. You can't be serious; He just tracked down the running back again!

8. Coach did you move him to linebacker?

9. Oh my god, did "Wynter just tackle both the blocker and the running back? 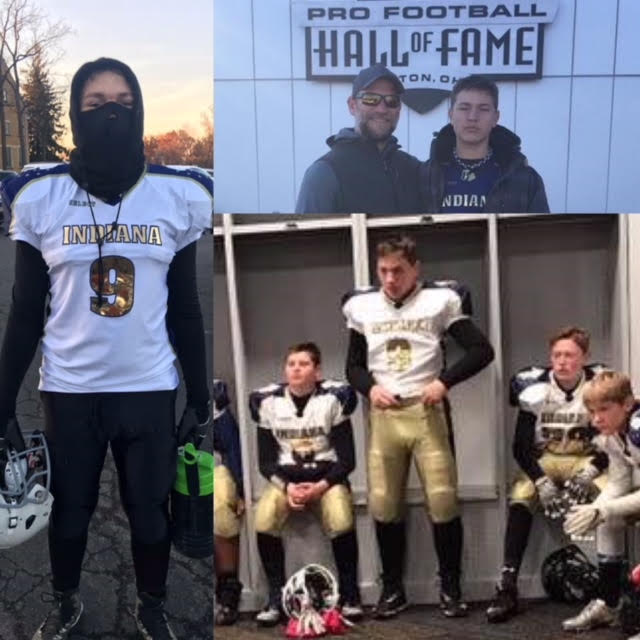 This #9 play happened at The Rocky Top Thanksgiving Bowl in Tennessee this year.  The opposing team was pinned close to their end zone and Wynter was playing defensive end at the time. Sons eluded the blockers & somehow ended up in the backfield with a full head of steam and nothing but bad intentions for the runner in his mind.

Sons was faced with a difficult decision. Should I engage the blocker and risk missing the tackle or should I go ahead and just tackle both the blocker and the running back?

Sons decided to simply overpower and smother both biscuits like a bowl of sausage gravy. The play is forever stamped in psyche as one of the most dominating plays in my 20 plus years of coaching youth football.

I have to say, "Wynter Sons, is going to be a fixture in the football world if he continues to play the sport. He will likely be compared to other Bloomington South greats in the modern era, such as Bo Barzilauskas. Stay tuned for what is next for Wynter; but this season was a "Wyntery Mix" and there is no calm days in the forecast for years to come. There is a blizzard in the forecast! Let is snow, let it snow, let it snow this Wynter Sons". 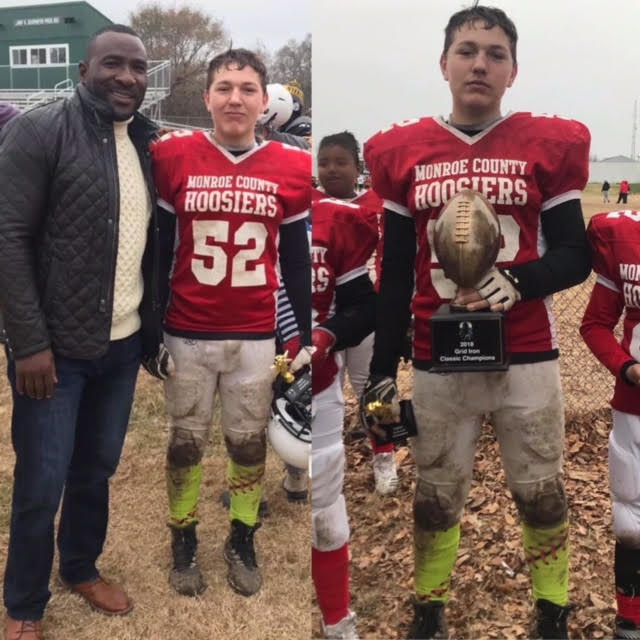 The list of questions went on and on progressing from tournament to tournament. Wynter is a physical specimen and stands at 5'10 inches tall and his frame is nowhere close to being filled out completely.  He weighs about 190 pounds and is solid as a rock making him a terror for any ball carrier or offensive linemen trying to find a fit on him or elude him within the tackles.

Wynter got his reputation for throwing his weight and momentum into his infamous "Alligator Role" tackling style. His technique is similar to a rugby style tackle except Wynter seems to emphasize the "Gator" and incorporates the hip toss into the mix as he tormented the backs for three tournaments like rag dolls.

Coach Zonk was very open minded about positions, but rarely solicited my opinion. The defense was probably one of the best I have seen at this level and I believe that if it's not broke don't fix it. But during the first game I said to the Head Coach, "Can we try #9 at nose guard? I think if we put him at nose the offensive coordinator will not be able get around him. With no hesitation Zonk made the call and from this point on a new generation of nose guard was born. Wynter basically flourished with forced fumbles, tackles for loss, sacks, and a plethora of amazing tackles in the backfield.

Wynter is an athlete and imposed his will on the opponents often drawing a double team when he bull rushed both A gaps. I yelled at him to, "Sit down on the double team" and did not expect this young player to get the concept with a simple explanation and my re-enactment between plays. He not only got it, but by the Championship game owned the monster sized Virginia linemen on every play. He applied pressure and tracked down running backs with ease. 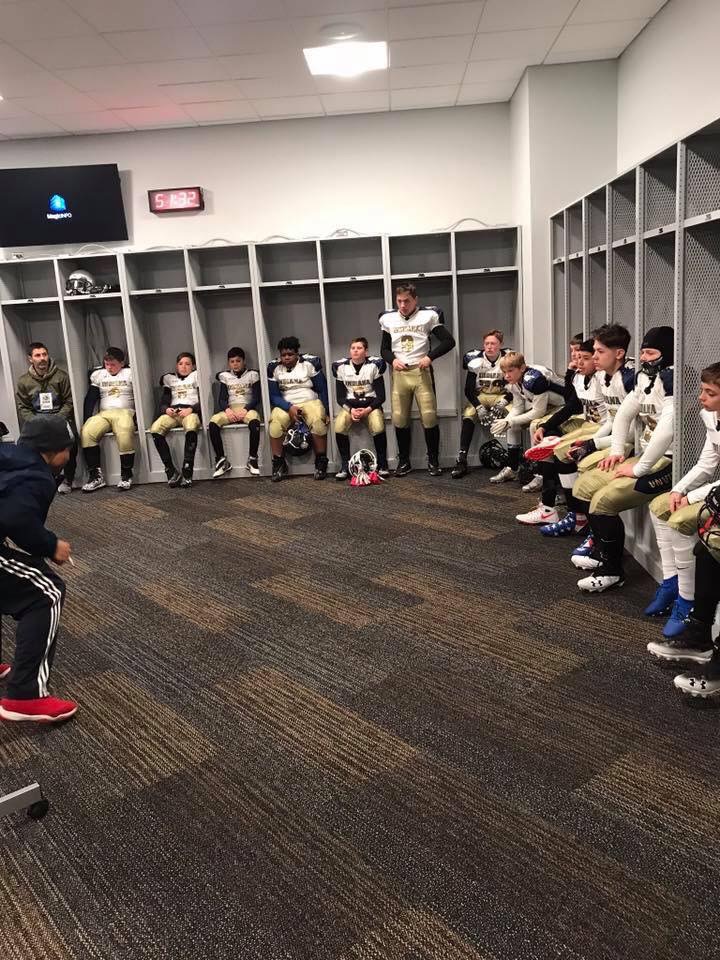 Sons has the knack of influencing a game on both sides of the ball. He was given a chance to run the ball this season and I would not be surprised if he gets a chance again next season.  The 6th grade was the only level to beat Team Indiana in the Pro Football Hall of Fame Academy National Championship games. His dominating defensive performance helped lead the 6th grade past Team Indiana and this win was what got the team into the National Championship games that aired on CBS Sports.