What is USA SELECT YOUTH FOOTBALL LEAGUE ? Who is behind the brand? 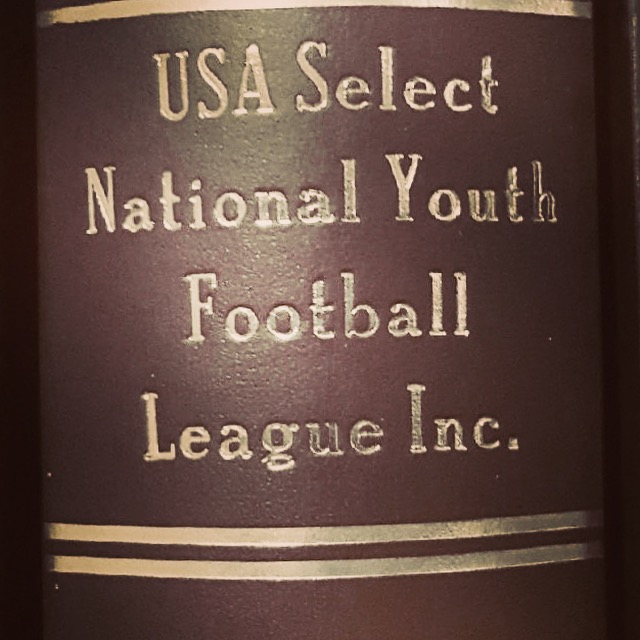 USA SELECT, THE ONLY LEVEL HIGHER IS HIGH SCHOOL VARSITY.

USA Select NYFL, setting the bar for the highest level of youth football outside of High School Varsity. All players must have a State issued Identification Card to participate.

USA SELECT YOUTH FOOTBALL LEAGUE- Is the only league in the nation with a designated television outlet. This is just the beginning and this continues to build momentum.

Message from Bill Lee- Available on the website as well using the following link below. 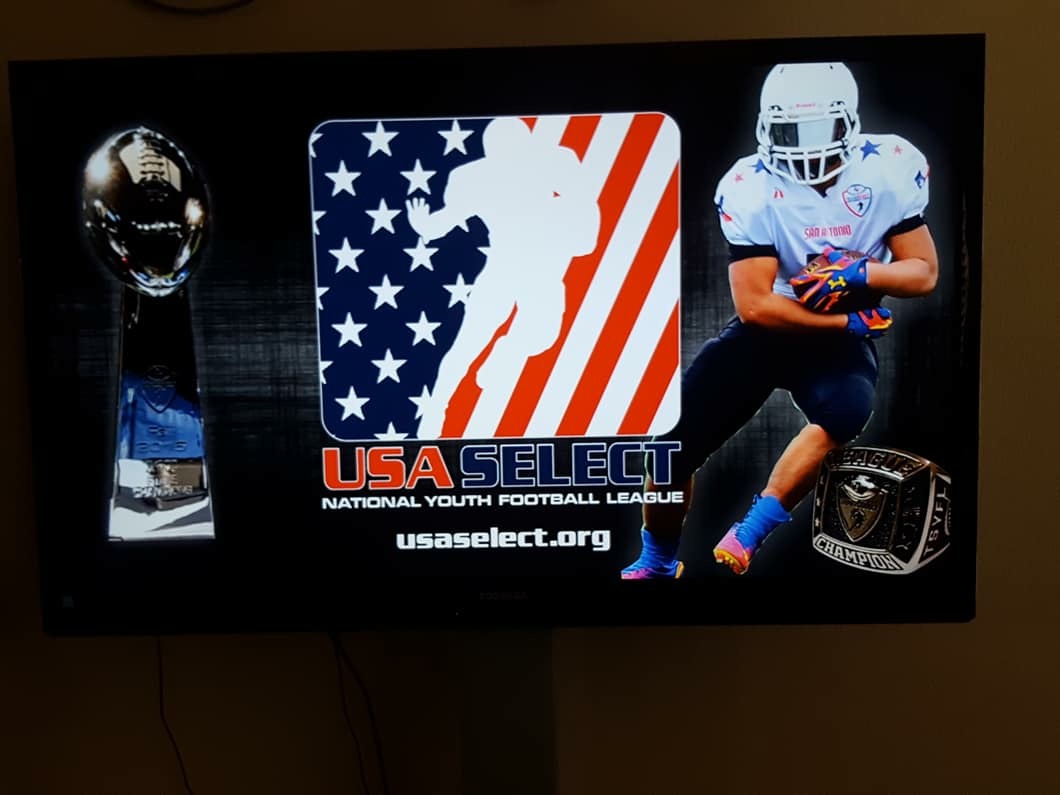 wrong with select football, what I am saying is it is a different equation than the guy who takes every player who signs up, doesn’t selectively recruit, doesn’t cut or run kids off and tries his best to retain everyone.

I’ve coached select and non-select youth football and I can tell you beyond any doubt they are different games. My Omaha teams played in a league where there was a select level and a non-select level. I had 120-150 age 8-10 kids every year to choose from.

The best 25 went on the select team, the remainder were divvied out based on the players address. When you get the best 25 out of 150 you have lots more options. Your teams are older, more athletic, bigger and more experienced. If you divided up the 150 into even teams of 25 kids each and then took the 4 very best players from each team- that would be your select team of 25. Imagine taking the very best 4 players from all the teams you play and making that into a team. That is what select football is.

Can your top 4 players do more than your remaining 21?

So imagine you have 25 clones of your best 4 kids?

Now ALL of our 25 were like those top 4. Our worst player would be the super star of the “B” teams.  Wouldn’t it be reasonable to say that you could do more and be better at what you do do if all your kids were the best? Say you can’t run a certain offensive or defensive scheme because they require that you have legitimate athletes at every position in order to succeed; well now you can run those schemes.

You don’t have to run schemes that minimize the impact of an  ultra weak player. Every non select team will have some ultra weak players with poor athleticism, poor size, poor body control and poor strength. In many youth  football leagues, those kids are required to play a certain number of plays. I’ve seen many youth football games lost by teams that didn’t manage this play requirement well and didn’t develop these minimum play requirement players well. 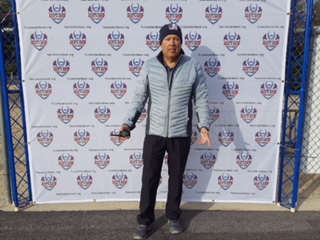 Most of the kids that play select football are committed, they play other sports, they have lots of “game” experience. If during evals they rose to the top 15% etc, they have something to offer that your other kids didn’t, that’s why you chose them. When I coached select teams we always had kids with a lot of natural ability.

We didn’t have very far to go to develop many of them. We always had kids who could throw the ball, always had 3-4 who could catch it and plenty of just good “football players” in between. We threw more, we could play with wider  splits and we could play our 4-4 defense and we could gamble more. Our special teams were off the charts because we had athletes at every position.

Even the BEST youth, High School and College coaches vary what they do every year based on talent. If we are honest with ourselves and others, when we have  more talent, we can do more on all 3 sides of the ball. I’m not saying that one style of play is better than the other, there is value in both, I enjoy coaching them both. Please don’t get me wrong, I’m not saying coaching select football is a cakewalk, it isn’t.

It comes with its own problems and challenges. But you won’t be dealing with any nonathletic, young, small and nonphysical players.

This article may be republished but only if this paragraph and link are included. 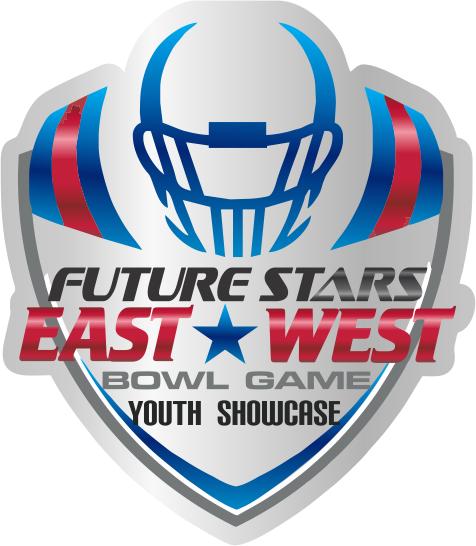 If you have any questions, or have interest please feel free to email. Also, please forward to others that you know may be interested in playing towards a select national championship.

The latest news from the world of USA SELECT is the All United States Games.  http://all-unitedstatesgames.com/ 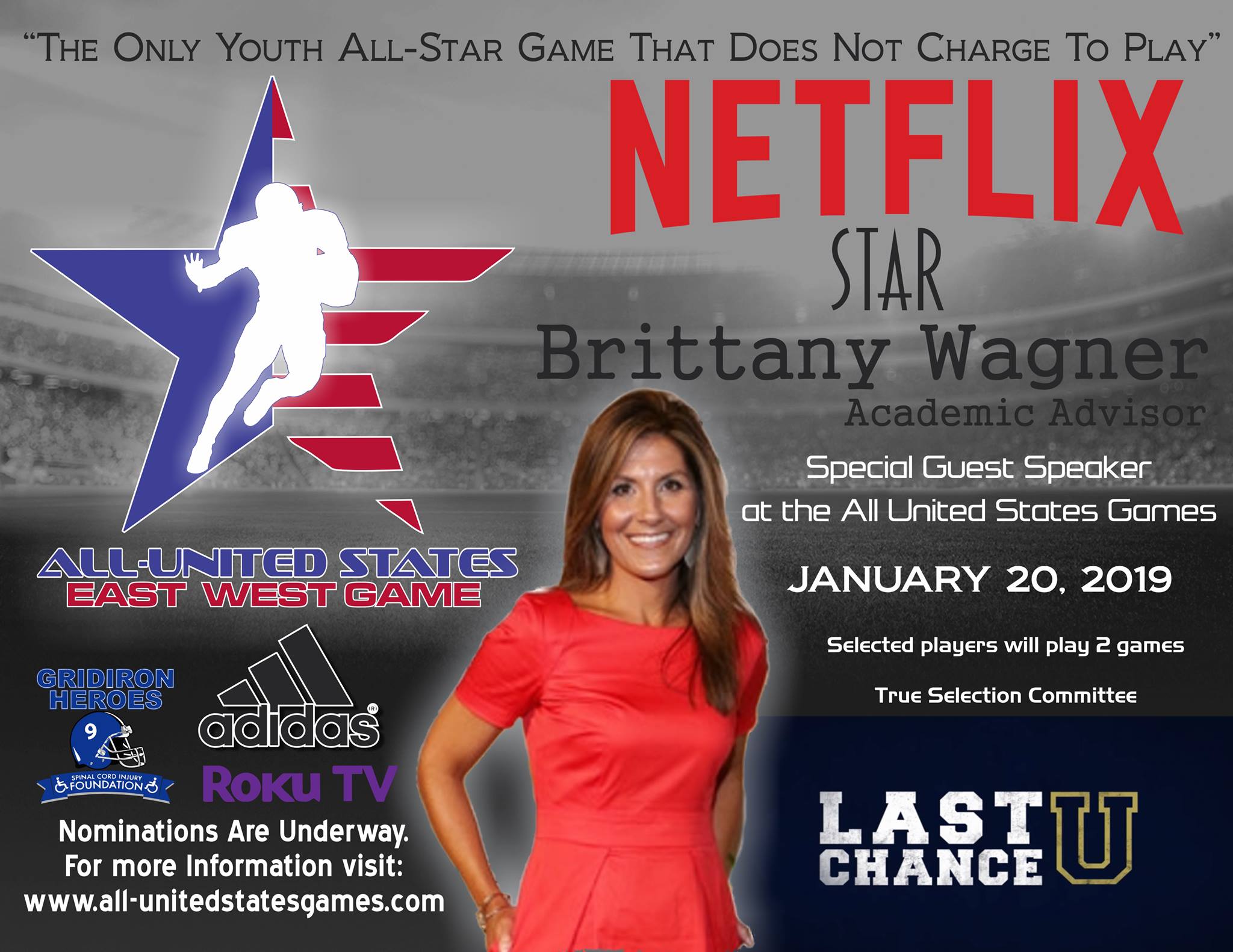 "Bill Lee takes pride in doing things the right way 100% of the time and I feel proud to be an affiliate league playing under the umbrella of USA SELECT. Like Bill Lee explained earlier the league is in its infancy and I am proud to be involved at the ground level. Indiana Select Youth Football League (ISYFL) plans to grow alongside the likes of Texas Select Youth Football League (TSYFL)", (Cole, 2018). 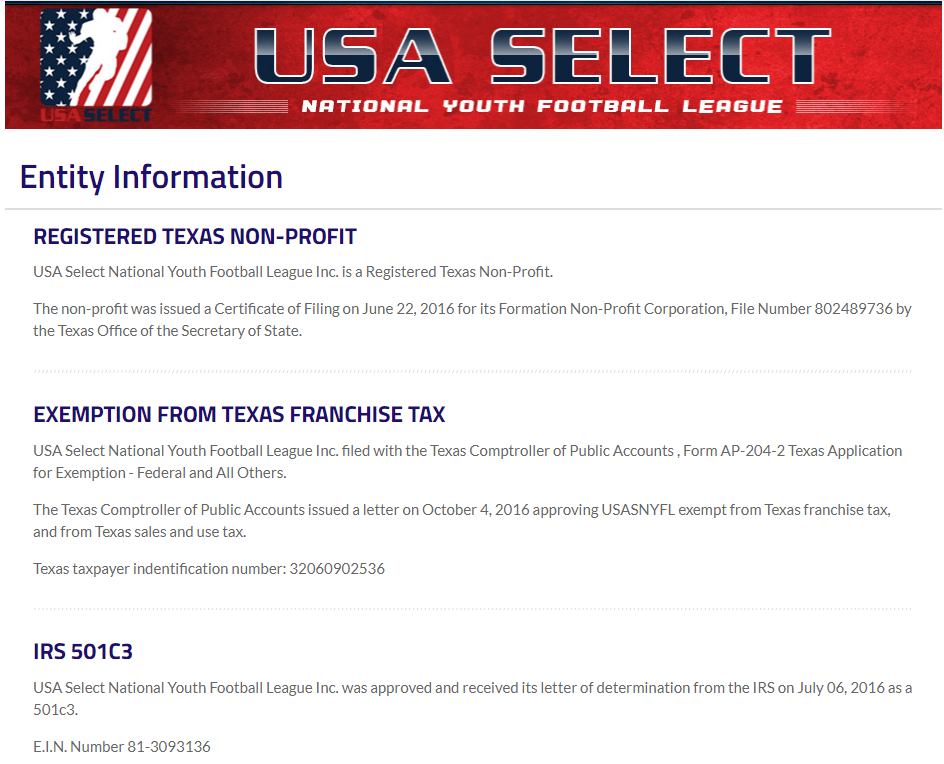 Bill is humble given the success of Texas Select of USA SELECT, TEXAS SELECT, FUTURE STARS BOWLGAME, ROKU STATION, and now the announcement of the All-United States Games in January 2019. This article in the Texas Youth Football Magazine basically sums it up and puts it all into perspective. Here is a snap shot of the article and a picture of the one of the most polarized youth players from the Texas Select "San Antonio Outlaws", 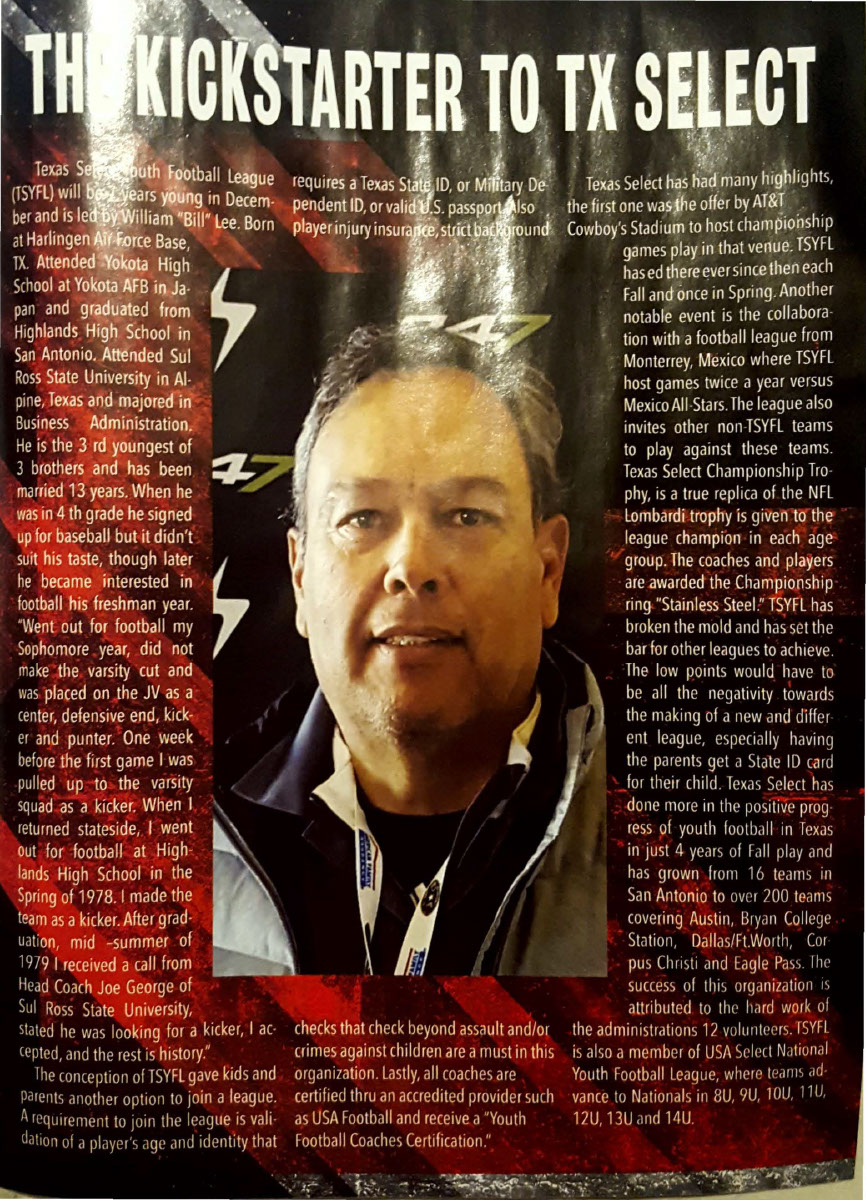 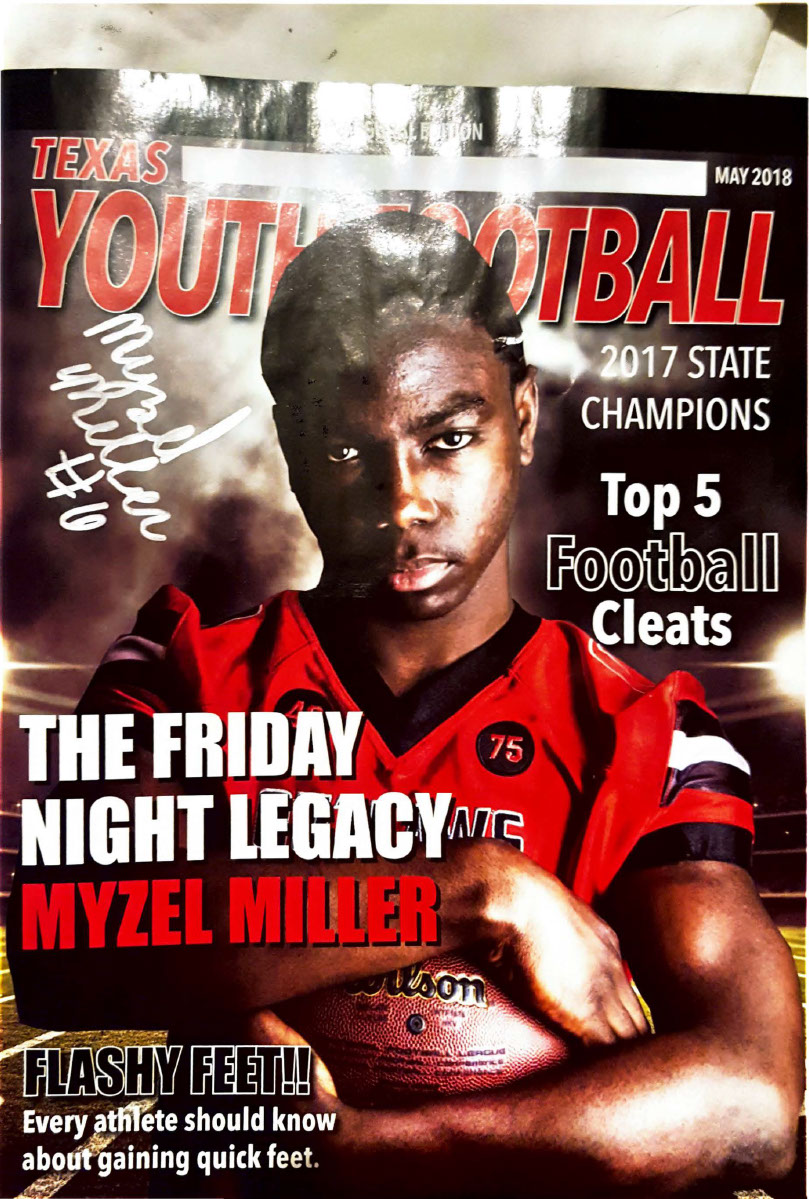 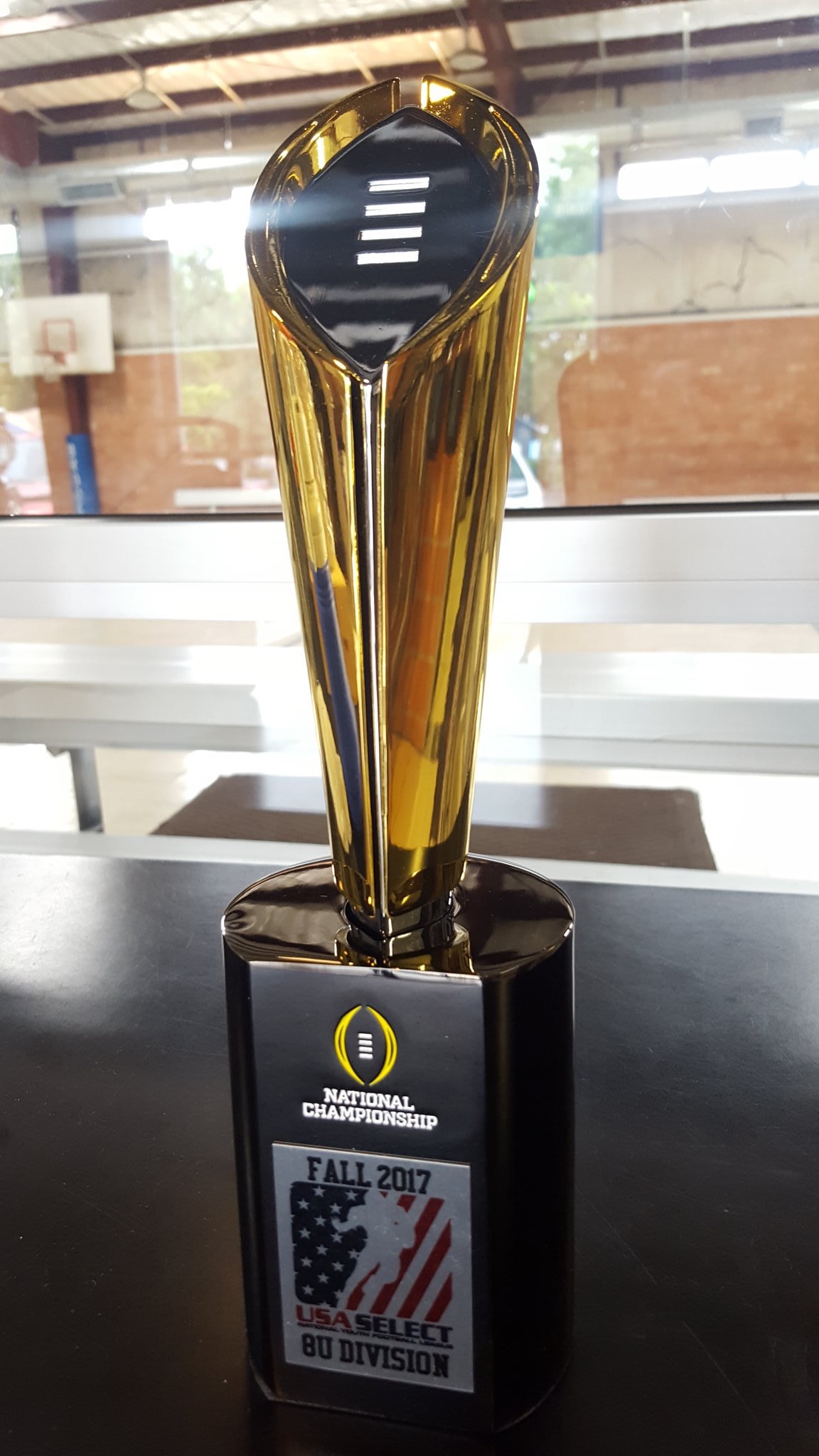 "It is an honor to work with Bill Lee from Texas. He is a fixture in Youth Football and gives Indiana Select credibility",

This article was intended to explain who, what, when, where, and why USA SELECT YOUTH FOOTBALL LEAGUE is spreading across the nation.