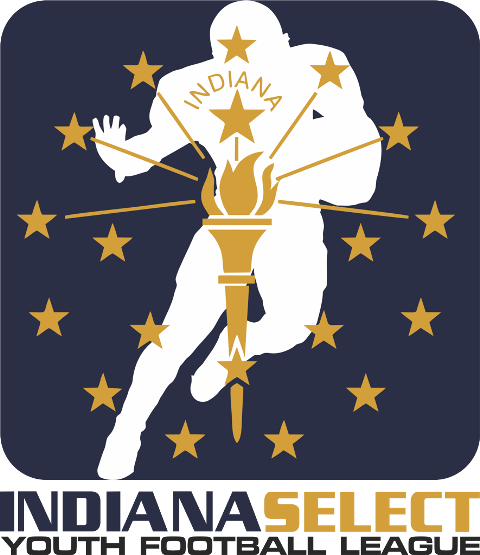 This the time of year when the "Middle School Elite" players get a chance to test their skills against teams from all over the country. The mission is simple, "Win Out". The players have been chosen for their football I.Q., Size, Speed, Play Making Ability, and overall Power Ranking in the Middle School Ranks. The players come from every corner of Indiana with this seasons core coming from the Southern Indiana Region. The coaches are selected for their experience and demeanor with the players; as opposed to a win at all costs mentality. The coaches however bring success to the ranks of Indiana Select with Championship Hardware and accolades to rival any youth program in the Nation. The teams this season are ready to compete for the National Championship Crown and will be invited to additional tournaments and/or games in San Antonio at the conclusion of the season through our affiliate partner USA Select National Youth Football League. The teams will regroup, breathe, analyze the season, and make decisions on whether to continue the journey to Texas or to move on to other sports. Many families participate in wrestling and basketball as well.

Everybody has a favorite coach for a variety of reasons and this coaching staff is not unlike John Wooden, Bill Walsh, Phil Jackson, or my all time favorite Bobby Knight. They get a lot of love and at times a lot of hate. This is what they signed up for. They agreed to lead their troops into battle knowing good and well win or lose they will have positive and negative feedback. I believe that is what makes coaches special; they really don't listen to anything but each other. The bond coaching staff's build is more of a brotherhood than anything else and they are each their "Brothers Keeper". Each coach has the others back when the going gets tough and get to relive the experience with story after story in the years to come.

The most important attributes the Indiana Select coaches bring to the table is their professionalism. The staff at both levels are stand up guys with the best intentions of the football families in mind. Their ability to channel the energy from a big win or target areas of improvement from a big loss should be commended because the game of football has highs and lows.  Both the 7th and 8th grade teams operate like fine tuned machines and organize like a collegiate program on a modest budget. The sacrifice the coaching staffs make includes watching countless hours of film, scouting,  time off work, weekend trips, monetary investment, emotional/mental/physical fatigue, long hours game planning, networking with parents, recruiting players, and most of all the. burden of winning. They all deserve a big pat on the back for their commitment, dedication, and hard work.

The real reason participating in tournaments at this level or placing your football family into this type of "Travel Football" scenario is to better prepare them for high school football. Friday Night Lights is an investment as well and participating in this type of program often leads to the players seeing the Varsity Field as early as Freshmen. My son Rylan Cole is one of those players and the list is so long; I have truly lost count. This season in the Regional Title Game the starting freshmen nose guard was Luke Schwartz for no other than Roncolli. I had to of course root against this "Stud" athlete because my son was playing, but this is one of about 9 starting freshmen from last years team.

With that said, I want to share a couple of messages the coaches took the time to prepare for their teams after last weekends tournament in Tennessee. The communication between coaches and parents has been 100% dialed in and on point from the beginning of the season! These messages are in the original text and so do not hold "Type Errors" against them. 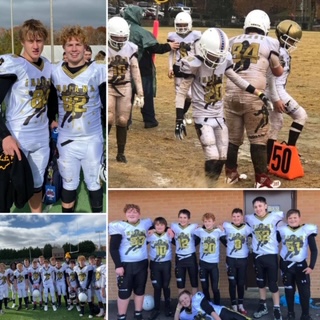 Coach ZonkWhat a weekend..... 1st game played Saturday at 11:20am in some of the worst conditions I’ve ever been a part of in all of my years in football, and we fumble on the very first play. Puddles, mud, slipping, sliding, and hydroplaning in every play. Most would lay down or make excuses due to the weather and sink in quicksand. Our boys lifted each other and fought till the final whistle laying a beat down and making a statement.

Then the field gets shutdown following our game causing a ripple affect of game time changes and location changes. Game 2 which was supposed to be played at 4:00 pm, now gets moved to 9:30 pm, and ultimately starts approximately 10:15 pm. This game was a battle. Two or three things go in our favor during this game whether it was a penalty or other missed opportunity and we win a hard fought game against the #1 team in Georgia that has played together for years and throughout regular football seasons. A team that did not have sportsmanship and class like I demand from our players. It’s very hard to keep emotions and anger from causing an action that they would regret and I respect and love each of my players for not dropping to that level.

That loss hurt. It hurt because of how close we were and knew that win belonged to us. It hurt because they were tired, sitting idle for 10.5 hrs after playing in a monsoon and gave it every bit of what they had. It hurt because they knew that loss took them out of contention to hoist a trophy up and they were so close. It hurt me to see tears in some of their eyes. Following the game I got them off of their knees and we came together putting our arms around each other. Letting each other know that we love each other and we’re family till the end. We looked left and looked right into the eyes of each other and agreed that this brotherhood and family only got stronger and we were going to grow immensely from that loss and that hurt would leave once they realized that..... 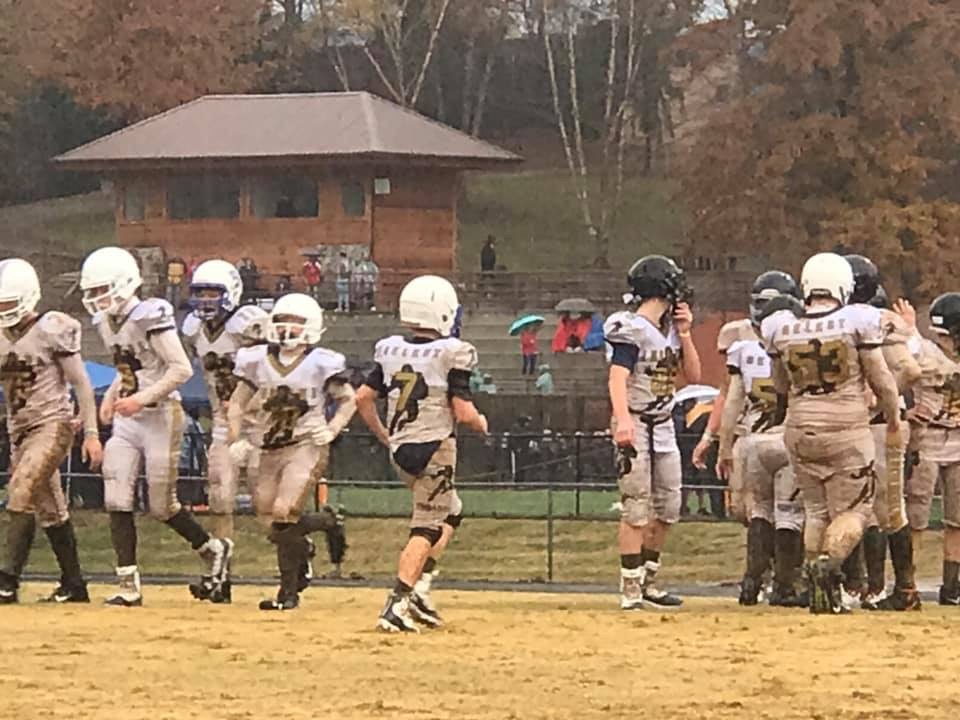 Game 3, today at 4pm, a new day after a hard loss. The first game we fumbled play number 1. Today we scored on play number 1. It was called back to the 15 because as a football brother was running down field one of our players wanted to make sure he wouldn’t be touched and cracked a defender to ensure he would score. The referees thought it was a little excessive only causing us to score 2 plays later. Our boys were out to make another statement today and played physical ball scoring again 5 minutes later and then came close again 3 plays later until we had a miscue. The very next play the opposing coach removed his players from the field stating he refused to play any further. This was my first experience of something like this in all of my football experience. 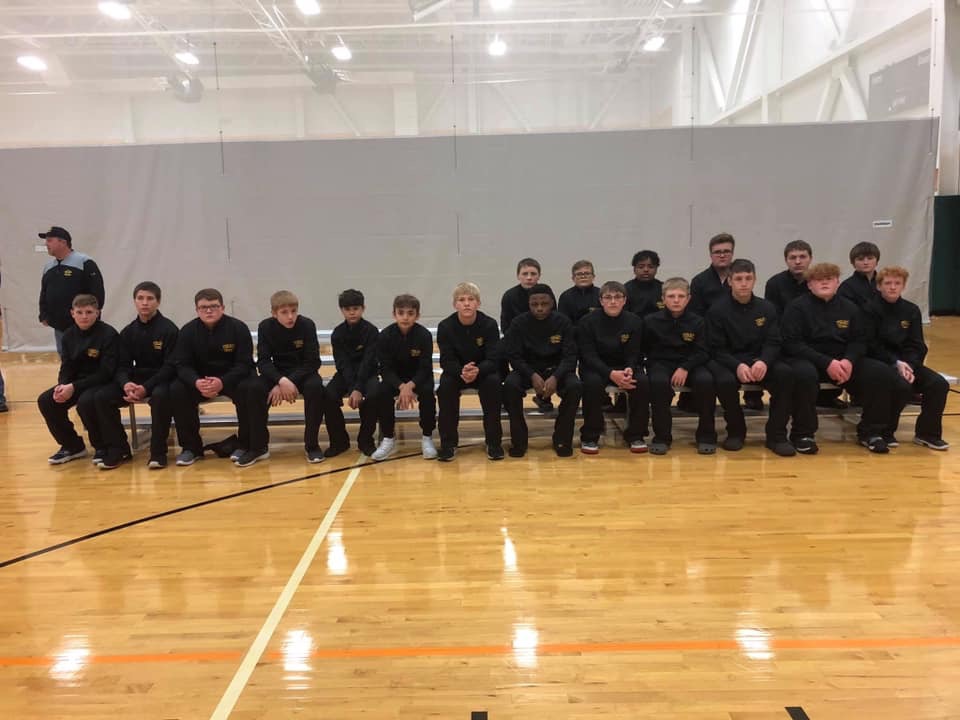 Through all of the chaos and a lot of firsts, a lot of memories were made, a lot of friendships continue to grow and strengthen, a lot of trust among them, and a lot of learning took place. We’re ready for anything Canton has for us. We’ll be back to full strength with our entire roster. We’re ready to tackle the weather conditions. We’ve faced our fair share of adversity. We’ve played against some of the best and biggest. We’ve grown and became one. We’ve been in that big game where emotions were high and trust was tested and know what we need to do to overcome.

This game is so much more than playing football and winning. I love each of these young men as if they were my own and I am pretty sure they know that after our talk last night. We’re ready for Canton, OH. Are they ready for us??? I will see you all Sunday at practice.

Coach BurtonWanted to say thank you again for this weekend.  It’s not everyday that you see 100% chance of rain in the forecast and you say let’s go and play football.  The boys didn’t let the conditions impact them.  We got to play at a very nice complex on the turf fields.  Some teams, including our 7th grade team had to play on a muddy grass field.  They had to move fields and play st 10:15 at night because their field was so bad.

The boys came out in game 1 and were focused and executed the game plan very well.  We won 39-0. Offense ran touchdowns, special teams ran touchdowns, defense was flying around making gang tackles. 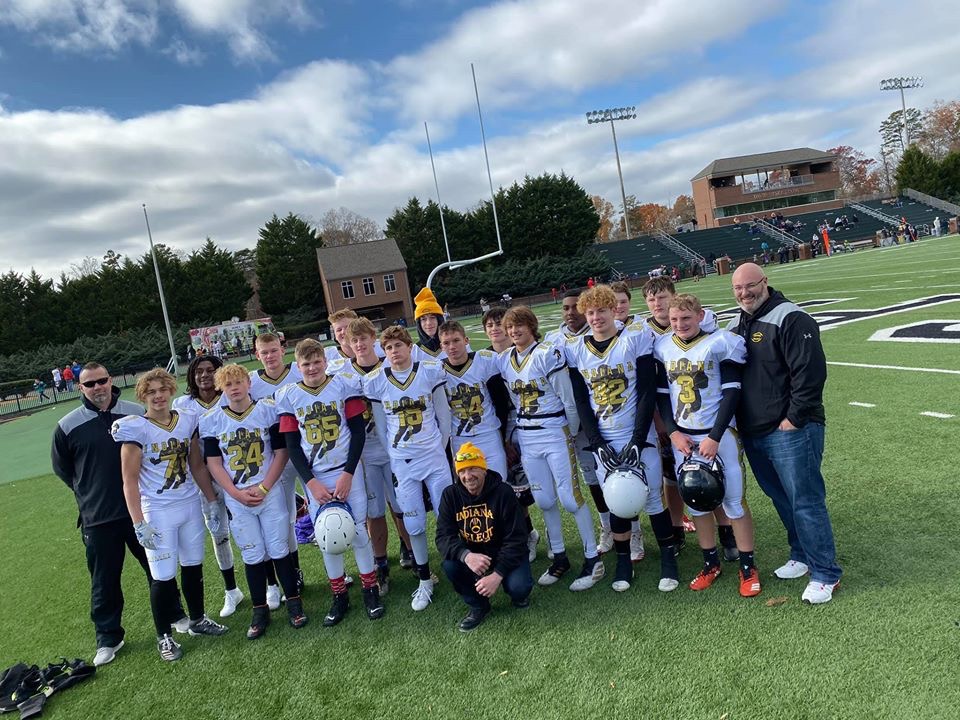 We took a loss in game 2 but the score is not indicative of how we played on that game. That team was big and physical.  Our offensive lineman showed that they are a force not to be dealt with.  The 95 yard drive where we kept the ball the entire 2nd quarter was super impressive. Lineman are rear Eley recognized but it was fun to see our trench warriors respond to the fight.  The coach of the other team came up to me after the game and said that we were the first team he has ever played in the last 8 years to where the offense was able to pound and ground.  He was impressed.  I know we lost but this game could have been very different if it weren’t for those couple onside kicks.  Adversity is a just a stepping stone for us to get better on.   We learned things from this game that will get us ready for Canton

Thank you again for the weekend.  I know we didn’t bring home any hardware, but we will learn from the weekend and use it to get us ready for Canton.

Good Luck to the Indiana Select 7th and 8th Grade Teams as they embark on the last leg of this years journey and the biggest tournament of the year which is the Pro Football Hall of Fame Youth Football National Championship in less than two weeks. I would like to wish all the families a safe and happy Thanks Giving with plenty of food and of course football. I also appreciate the leadership of the parents that have stepped above and beyond to facilitate the participation of this club, given my considerable time restraints this season. My son made a Semi-State Football run and I had recently changed careers, both of which require much time away from my passion.

Strength and Honor! The glory will be yours now and forever!

"Give the shirt off your back, turn the other cheek, avoid conflict, never run from confrontation, and communicate without bias, hatred, or negativity. This will empower, inspire, and further motivate yourself as well as others to live a righteous life; free of the karma the world has a tendency to dump on your psyche on a daily basis. Hug your children instead of your wallet and live the American Dream according your own interpretation", (Cole, 2019).