When it comes to girls’ flag football, there has been plenty done to elevate the sport over the years. But on August 10th, the playing field will certainly change.

What has been reserved over the past two decades for the boys, who play football, combines are now reaching a different market. A market that is ready to join this inclusive showcase.

The first full Female Football Camp & Combine will be held on Saturday, August 10th at Ives Estates Park (20901 NE 16th Avenue, Miami, FL 33179), and this event will not only be ground-breaking, but will provide exposure for female flag football like never before.

With former Miami Dolphins’ standout Chris Chambers, well respected boys’ recruiting expert Larry Blustein and Laz Suarez from the popular Bleechr.com website and social media outlets, hosting this initial showcase, this day promises to be one that many will remember.

As top flag football teams and players are expected to head to Miami, the objective is exposure, evaluations and instruction by those coaches who have been around this sport for many decades.

“This is a natural transition for these young ladies to finally get the exposure their sport has long deserved,” said Suarez. “We have hosted football combines for the boys over the past decade with so much success there is no doubt that girls should have the same opportunity to put themselves on the map. It's about time.”

In addition to the testing portion of the combine – that will include the 40 yard dash, L-Drill, Shuttle, Broad Jump and 1-on-1 battles, the event will also provide an opportunity for those on hand to create a profile on Bleechr.com that will include information, videos, academics and anything else that will help the players track their progress through the years and get themselves noticed.

Each camper that attends the event will not only a have a head shot photo taken, but also get some action photos of the camp/combine and will include media coverage. An event shirt will also be issued to use during and after the camp/combine is completed.

For Blustein, who has covered high school football for 49 years, his experience of recognizing and promoting athletes has included several who have been inducted into the Pro Hall of Fame – as well as numerous collegiate and NFL players, who continue to leave a mark. 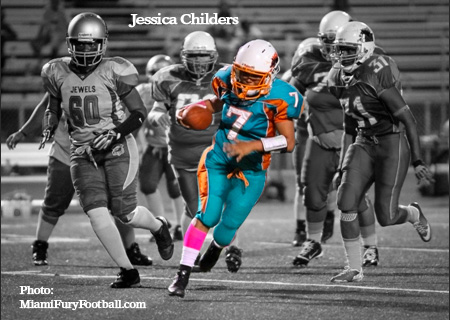 “This is a great opportunity for these ladies who want to pick up pointers from a great coaching staff, and media that will get names into the spotlight – while helping to elevate the sport,” Blustein explained. “That group of coaches include Chambers, an All-Pro receiver for the Dolphins and Chargers. It will also include former flag football player, coach and current member of the Miami Fury women’s tackle football team, Jessica Childers.” 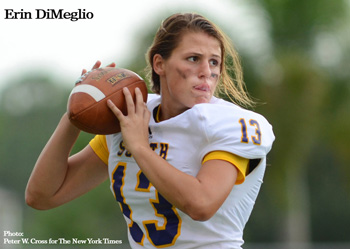 In addition to Childers, Erin DiMeglio, a former high school football and basketball player, will be on hand to instruct. She became the first female quarterback in Florida high school football history to complete a pass in a regular season game. As a third-string signal caller for South Plantation in 2012, DiMeglio accomplished that had on her second attempt a game against Piper.

Blustein also believes that an event like this will provide opportunities for these players who want to elevate their game and make a serious run at next year’s State Title.

As flag football is now one of the premier spring sports, there is a need for more exposure and teaching – and while much is being done for these players in the way of games and leagues – nobody has the manpower and experience of promoting and hosting a camp like Bleechr. 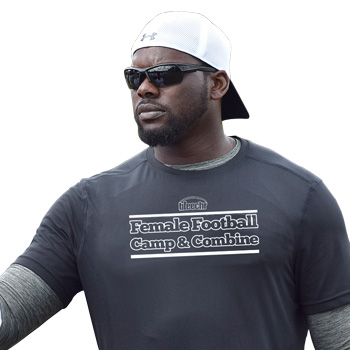 Want to register or have a question about this premier showcase? Visit Bleechr.com.

“We are very excited about this endeavor – and cannot wait to get started,” Chambers explained. “If you haven’t been to one of our events that we run for the boys, you will see that everyone who attends will get recognized and publicized, and that is a great thing!” Stay in The Loop