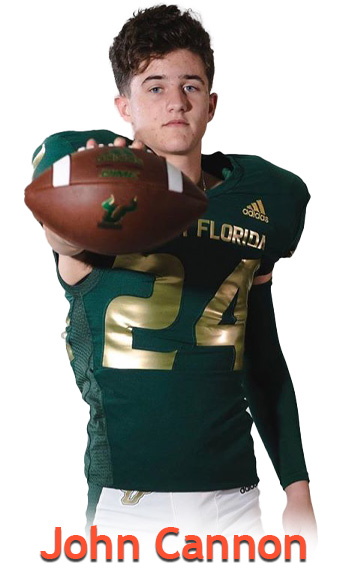 Hailing from Fort Lauderdale, Florida, John Cannon is one of the top recruiting commits (July 13, 2020) for The University of South Florida out of the 2021 class. A football career that started him at receiver and defensive back placed him into an opportunity to do something his team needed early on during his middle school football days - someone that could kick. By 2018 young Cannon was 1st team All-State and 1st team All-County. But this was not by mere luck, John worked his tail off in the off-season and even during regular season.

Recruitment picked up after John's sophomore year, eventually finding himself in love with the University of South Florida, and that love came right back to him in the form of an offer. Cannon's first career point came against Glades Central, who knew that that first point would eventually lead him to kick the game-winner in the State Semi-Finals.

It seems like Mr.Cannon has a knack for being Mr. Clutch, consistent in his game, going 35 of 37 PATs and making 7 of 10 field goals. John is a gritty kid, when asked about his favorite football moment, he said "making my first tackle on kickoff". We asked John a few more questions and here is some insight into why this kid has a 75-yard kickoff with a 3.32 second hang time.

Q: What was a typical day of training for you like?

John: "A typical day of training would be a high intensity 30 min workout at my trainer's gym. Then attend team workouts in the afternoon and kick on specifically scheduled days. I would kick about 30 balls during those sessions 2-3 times a week (Off-season)."

Q: What would you say is your strongest attribute?

John: "My strongest attitude would be my accuracy and ability to stay calm under pressure."

Q: What was the hardest thing about recruiting?

John: "The hardest thing about recruiting would have to be getting my information to every school and being patient for offers as a kicker."

Q: What do you look forward to the most at South Florida?

John: "I’m looking forward to the atmosphere of the fans and being able to play in an NFL stadium. 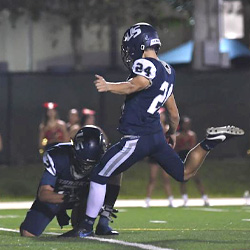 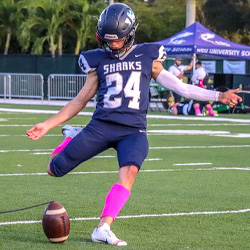 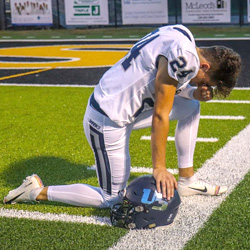 We took a look at John Cannon's film ourselves and gave him a review: Here is what we saw -

Powerful strike at the point of contact with a smooth follow-through. John can play with the height and length of a kick as well as direction and hang time with ease. Saw kicks in inclement weather, with high winds, under pressure, ear blocks on the edge, but still got the kick off in through the uprights. Keeps head down through kick and has a cannon/whip for a leg that does not trail drag behind foot and ball. The initial height of kicks is consistently ideal, and the top end of kick also has an excellent hang time on kick offs and drive through field goals. Has worked on the form to the point where you can see it is the same number of steps each time he kicks, polished technique.

Overall, John is consistent and comes through in times of need. 5'9'' 175 pounds with a 94.4% overall high school career PAT conversion percentage. John also runs track and has excellent marks in school, he was also recruited by Brown, Dartmouth, Harvard, and Nebraska.

Our Partners
These groups share our passion for exposing, showcasing and training talent from coast-to-coast.